On April 12th, I went to the Midwest Gaming Classic! The event was filled with REALLY enthusiastic gamers, and it was the perfect place to test out and stress test the new Thunder Gun!

Overall, the experience was great; I got valuable feedback from players, made several interesting observations on gameplay, and received a massive boost to my game-dev morale! I figured I'd share some of these things to help others out and explain what Thunder Gun is growing into!

I was actually invited to show off my work by Albert Chen via Twitter as part of the Madison IGDA, which was a really interesting opportunity. Up until that point, I hadn't even considered showing Thunder Gun publicly; this event would be the first time anyone, other than me and a close friend, would get to play it. In the time leading up to the gaming classic, I was forced to make the game as fun and intuitive as possible. When you're developing something for so long, you start to "lose touch" with how the game plays and exactly how difficult it is, especially if you're not getting other people to take a look at it.

A couple of days before the event, I decided that I needed to bring my newest computer to the show. If you're thinking showing off your work, consider using really nice computer and sound equipment. Granted, you're there to show the game, so the game should speak loudly, but you won't even be able to hear it without some nice speakers! Laptops are nice, and I've used laptops at shows before, but if you actually have a nice computer to bring, it will go a long way toward making your work look better and more (quote on quote) "professional." It's also way cheaper (and convenient) than going full on posters and booth-like if it's a small enough show.[1]

A LOT of the people who played Thunder Gun at the classic played it with a gamepad.[1:1]

What makes that fact interesting is that Thunder Gun was never meant to be played with gamepads; a majority of my testing during development was centered around using a mouse and keyboard. Imagine my surprise when people thought that the (what I believed to be weird) controls on a gamepad were actually pretty intuitive.[1:2] People didn't just "forgive" the control scheme, they understood it much better and actually preferred it.

The lesson here is that you can't underestimate your players; as long as the control scheme makes sense, it won't be a deal breaker. I had at one point before the classic considered forgoing gamepad support altogether! In retrospect, that would have been a bad decision for sure. 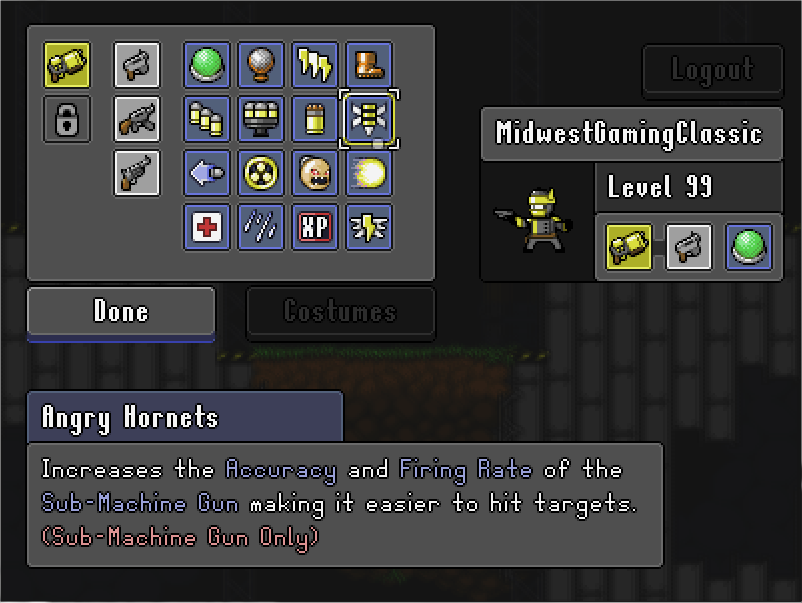 One of the harder pills to swallow was the fact that my UI is a bit crap. There were several features that people didn't even know existed! If your were one of the few people who found the INVENTORY screen, you may have become one of the even fewer people who found out you could CROUCH, which is, frankly... horrifying!

I've had time to think about this, and I can't attribute this problem solely to the short amount of play time for any player, because there were several people who played five or six rounds who still didn't see the Inventory.

Fear not though, I'm taking steps to fixing this. The simple answer is to improve the UI, but my deeper issue is the still missing Leveling and Progression features that would inform you of unlocking Perks and Costumes. You need to make important features clear and telegraphed, otherwise who's going to use them?!

If you know me, or read this blog, you already know that I have "wishful thinking" deadlines. I'll admit, I originally thought the new Thunder Gun was only going to take TWO WEEKS. Eight months later I can safely say I was wrong![1:3]

So yeah: hopefully I'll be on Steam. We'll see. It'll at the very, absolute, and very abysmally least, on Mac and PC through my site.

Streaming the game though?

I feel like I'm doing better on that front! In my humble opinion, I think Thunder Gun would make a really fun streaming game. Lots of really interesting things happen while you're flying around shooting at shit in there, and Thunder Gun did draw some groups of excited onlookers at the show.

This also remains to be seen, but what I do know is that the game runs very well on my 4 year old, 2GB RAM laptop, so you'll (hopefully) have plenty of space to screen record.

I might be bitching about Steam and the UI issues, but ultimately, the Midwest Gaming Classic was one of the best times I've had showing off a game. There was only one full on crash in the game, and I felt well prepared to blab and watch people have a good time. It was the play-testing the game needed, and the fun-away-from-development-but-still-development.

I left the show feeling a lot better about the progress I've been making, even if you guys don't see it; hopefully it won't be too long until you do! <3

Pages from the Abyss