After the recent move to the new Ghost Blog, the old suteF blog is entirely gone! Not only is that a lousy shame, but I also found some really neat fan fiction and mythos discussions on the internet about suteF, and this inspired me to resurrect some of the missing posts and infromation that are "public records" so to speak of the different happenings in the Abyssal universe. This will also have all of the information present for you in one place now.

So without any further ado!

Even though there isn't much explained during the game, their is however a story behind this blue character that runs amok in the nether-regions of the abyss.

To extract his revenge, the character, Aramas, needs to kill Fetus. However, Fetus can only be killed by the undead. This requires Aramas to construct a time machine while he's trapped in the abyss (from various laser bots and mechanical parts found in the portal TVs) to transport himself back in time once he's dead. You as the player are Aramas before he even concieved building a time machine, and is relatively inexperienced in the ways of the Abyss. Time and space are so skewed when you go through a visionometor (the portal TVs) that in one future or another, Fetus has already been killed.

Orbis, the undead catfish spirit, dwells in the Abyss in an attempt to equalize time and space. His powers are too mysterious to be explained, but Aramas believes Orbis to be someone who has the ability to shift between the 3rd and 4th dimensions of space (time is not the fourth dimension).

The other blue dead characters are different incarnations of Aramas. Some are dead versions in universes where he's failed. During the timeline in game however, Aramas never runs into himself, other than his spirit form, who Aramas dubs "Bob." "Bob" disapears some time during the journey, but reapears. The second meeting is between a "Bob" of 1000 years dead as opposed to a "Bob" 30 years dead.

Diagram of the Abyss

In suteF, the Abyss plays a much bigger role than did its predecessor; different effects can be observed based on the various areas that you explore. The most distinct areas being the Abyss in general, Playland, Chaos, and the Abyssal Shell. 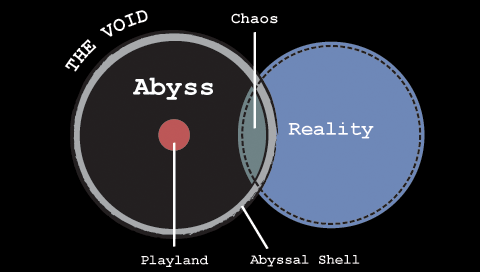 You’ll have the opportunity to visit all of these areas by playing each chapter in suteF; the rooms will look different and some of the rules will change based on which area of the Abyss you’re currently in.

If it isn’t obvious, Aramas’s (the main character) goal is to make his way back to Reality. The story goes that the only way to make it back through to Reality is by breaking through the Abyssal Shell; one of the presumably endless amount of ways to do so could be by killing Fetus, since he’s rumored to have ultimate control over the Abyss (based purely on hearsay and Fetus’s demonstrations of power). Not only is that required, but Aramas also needs to make sure that his break through the Abyssal Shell is within the overlap of Reality time and space, known as Chaos. If he isn’t, his only home will be within the Void; a land of complete emptiness. 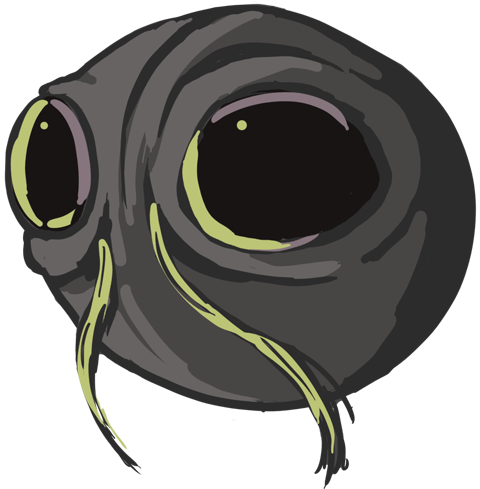 Orbis has been described as the ‘undead catfish spirit’ of the Abyss. He’s a fourth dimensional being, in the sense that he has an extra dimension that we cannot conceive. (as opposed to the notion that the fourth dimension is time, which it isn’t in this case).

To answer ac3_g33k’s question, Orbis generally resides in the greater Abyss area, but he does have the ability to send himself to any part except Playland, which is solely controlled by another character [named Evil]. [Orbis] can even dip into reality if he wants to, but he isn’t visible due to his fourth dimensional properties.

There are also some other very interesting facts that I want to point out about Orbis. He is considered a deity of change, meaning he can change any existing object into whatever he sees fit, as long as he uses all of the subject’s matter in the process.

He does in fact have a mustache. 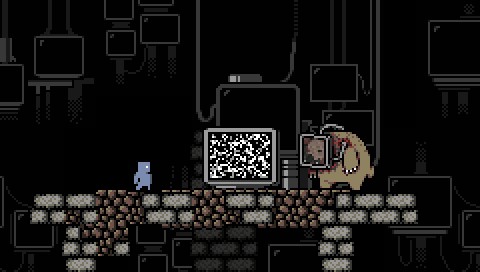 "You don't belong in this world. Elevator is your salvation."
-Computer Bear

"Oh. Why hello, Aramas. I know you've conspired to destroy me. You can't kill me; I am everything. Love and Hate. Care and Neglect. Sense and Chaos. You think you have a hope? You're pretty selfless, though, but that doesn't buy you anything here, especially my mercy. You'll rest in the dwelling of lost souls, and your new 'friend' will take care of you."
-Fetus

"I hope I get to see you bleed out like the other you. You made it far in Playland, place'd here in all possible forms of time. To LEARN in purgatory what was true Evil. To REAP the love of death. Yet, Blue naturally seeks Revenge. I tell Blue this: "That means Fetus has already won."
Life is lost as novae in superspace. Time is thin as lines between the atom. Memory seeds the futile fruits. Dead twig more strength than revenge..."
-Evil 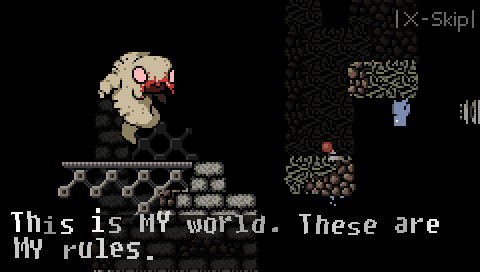 "Oh. Why hello, Aramas. You've been causing more trouble than usual. You can't escape the Abyss. Reality is only a dream; nothing waits for you there. Family, comrades, life? They're all dead. Removed from calculation, just the way I want them.
I can tell you have some questions for me. Not going to answer them. Messing with my friends makes me... angry? Tell you what. I'll let these strains of your timeline live... if YOU can."
-Fetus