Do you have an hour to kill? How about a friend and 2 gamepads? That's what Roboroso is: a good old couch game.

Roboroso is the product of this year's Global Game Jam, where video game developers from around the world simultaneously develop games in a 46 hour period. They're working everybody into the book of world records. :D

I was the designated programmer in our team of four. Dr. Nathan Patterson, was our designated sound man, creating the wonderfully weird music and phonetic sound effects for the characters. He is featured saying "Roborosorazation complete" upon one's inevitable demise.

Jordan Laine was the design honcho and an artist. He balanced the team's initial concept, and soon became the project manager and directed us when time was putting me to sleep. Jordan drove ALL THE WAY DOWN FROM MINNESOTA JUST TO JAM. DEVOTION.

Lastly, we had the game development newcomer, Paul Goeser. Paul helped with the design and some of the art as well. 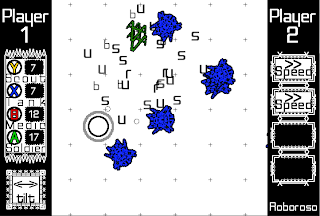 So what is Roboroso? It is an asynchronous two-player arena combat game. Both players take turns sending units at their opponent player in the arena. The first player to run out of units loses. That's the cut and dry version.

What were my personal goals and motivations behind the project? As with game jams in general, collaboration is great. As much as I resisted the idea initially, it turns out in the end that I just like working with other competent game developers. (Kevin Harris had to poke and prod me until I finally got my head straight and started jamming. Thanks man!

One thing however that I've been stressing about this last year is my want for a universal return to the classic couch game: playing a game on a couch, hopefully with your buddies next to you, joining in and applauding the action. Much of my gaming life has been spent this way. Online play just doesn't really cut it with me; I've always believed that face to face interactions in games with your friends are THE strongest way to make one of my aforementioned 'moments' a reality. I feel like Roboroso is a step in the direction I want to take more of my future games in.

For now, you can enjoy Roboroso, and some pictures (courtesy of Christopher Fournier) of members from the team at the jam! :D 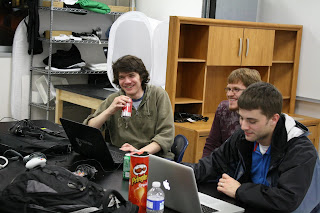 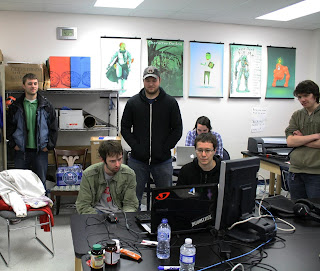 A couple of fellow jammers trying Roboroso out. Jordan is the guy standing behind the two seated players

All of Chris's pictures from the jam can be viewed here. It was pretty awesome! We managed to fill the entire auditorium with participants. :O

Here's to many more game jams!

On Hype and Expectations