The big Thunder Gun: Revenge of the Mutants Steam update (v1.0.3) is complete and will be coming out on September 22nd, 2016! (Click here to see the Steam page!) I've been finishing up Beta testing and Steam store approvals, and I wanted to talk about behind the scenes stuff in a Developer Commentary video — BUT! — I also wanted to go into detail about all of the cool stuff added to make Thunder Gun a better, more transparent nugget!

Just to remind everyone — if you purchased Thunder Gun: Revenge of the Mutants from Gamejolt or itch.io, you'll ALSO be getting all future updates that the Steam version gets (including the ones I'm going to talk about in this post!), and your itch.io keys should be able to get you a Steam copy if you wanted to play it there.

By far the largest (somewhat silent) fault of the initial release was that nobody really knew how to play it or what to think about it. I hated the idea of having a cut and dry Tutorial, but ultimately, something as direct as, "this gun pushes you back, and that is NOT a bad thing," is what needed to be said. Unfortunately, I feel like a game that doesn't have a campaign or PvP to let you explore nuance needs to have a Tutorial that just tells you how to jump into the arena with a fighting chance. I know Thunder Gun's depth is not as insane as Dwarf Fortress, but just imagine trying to play Dwarf Fortress without knowing anything about it beforehand: FUTILE.

Other feedback I got was something along the lines of: "I think there should be more enemies." I was reluctant at first; there's a delicate balance of enemies versus scoring, overwhelming, etc. The Sentinel is built on a weaker, Fat-Mutant chassis with a fast, Drone-like Missile attack. However, said missiles are only fired when the player is near, so the Sentinel feels like a dangerous foe, but is only deadly if you ignore him at close range. The end package of the Sentinel feels a lot like the Stomach Mutants: anxiety.

Just to spice things up a bit, I wanted to add a third map. Silo is a tough map (it's good, but requires mastery); you would hit your head A LOT, so my premise with the new map, Kiev, was TONS of head room. If something is obstructing your jumps, you will see it without jumping first. The Mines have always been great for maneuvering, and it took the first release a year ago and a bunch of play testing to figure out that that was the missing element in the sometimes weaker alternate maps. 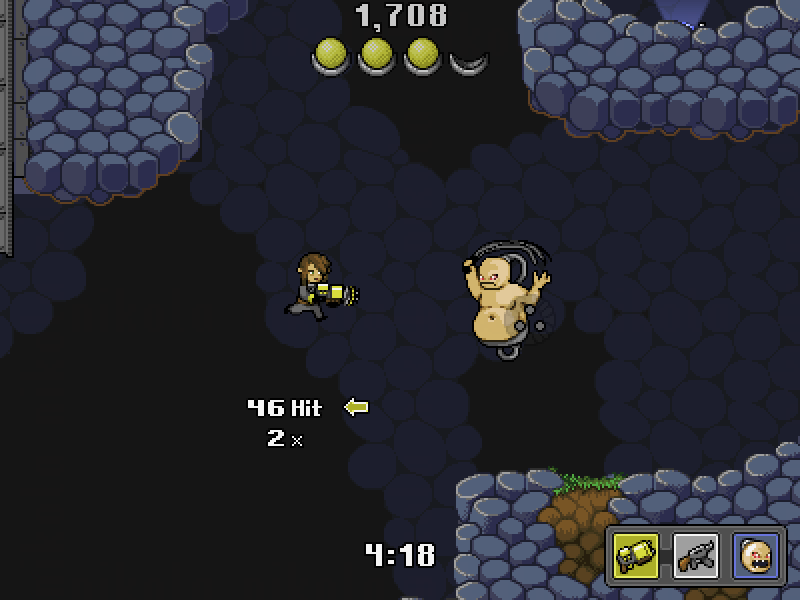 The SMG's reload time was way too slow. Basically, for high level play, you were doing yourself a disservice, especially if you were using Auto-Switch in the options. The Steam update fixes this issue and balances out damage and health to and from enemies accordingly. There've also been several improvements in the HUD while you're playing — mainly the Hit Streak Counter and Multiplier. There were some other small bugs that have been fixed, and you can even play the game on OSX without the annoying "this game will harm your computer" message.