If you haven't seen me tweet or Facebook this, here's your chance to know. Thunder Gun has gotten a second Greenlight campaign with a new trailer! Exciting, right?

Well, sort of. The idea is to see if there were any issues with the original Greenlight by doing a second one. To be clear, the first Greenlight attempt did not end with a Greenlight from Valve or Steam users.

This time around, I've had Isaac of Clockwork Giant help me with the analytics and trailer, and I've lowered my expectations a bit since the first attempt. There was almost no risk involved with giving this a second go; the trailer and materials prep only cost us each 3 days of work, and for a game that's already been out for 8 months on itch.io and Gamejolt, why not, right? Even so, it took a lot of coaxing from others to get me to do this, mostly because I'd had such a crushing experience launching Thunder Gun back in September.

There are a couple of short to medium term goals I have with Greenlight: the obvious one is to push an already existing game of mine on there. Second, my upcoming game Future Crime Corporation is going to be giving Greenlight a go, too. Isaac also explained to me the idea of lowering risks involved with developing a full title by adopting a sort of 'Greenlight as a pitch' mentality. Basically, game #3 of my first go at commercial indie is going to be vetted by the Greenlight process. I have some things to talk about this.

We need to agree that Greenlight is not a very good process, but the fact of the matter is, it's the only system that really exists to get your shit on Steam without having to know the magic emails or have something that already IS on Steam. We shouldn't HAVE to prove our worth to the players before we even have something to play, but we do, right? Not to mention that when someone's voting 'No' on Greenlight, they're not even saying it's a BAD game, they're only saying they wouldn't BUY it. That could mean it's not their type of game among a myriad of other reasons someone might not vote yes. As a matter of fact, when someone says 'Yes,' they're making a decision based on something they haven't even played. HOWEVER, you HAVE TO REMEMBER: the same could be said of someone BUYING your game. 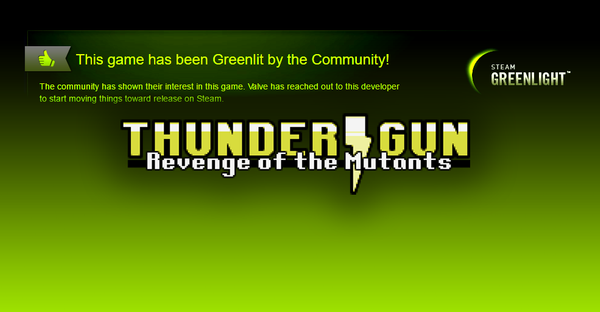 After taking part in the now finished LazyGuysBundle and a cumulative 8 months of being on Greenlight across 2 launched Greenlight pages, I received notice from Valve that Thunder Gun:

If you haven't heard me on twitter, Thunder Gun: Revenge of the Mutants hasn't been doing "well." At the end of 2 weeks after its release, I've sold