It's official: Thunder Gun: Revenge of the Mutants will be coming out for Windows and Mac OSX through Gamejolt and itch.io on September 3rd!
Take a look at the trailer!

Now it's time for some background information. What exactly is Thunder Gun?

Thunder Gun: Revenge of the Mutants is a Combo-Focused, Arena-Based Sidescrolling Shooter, set in the dark future where evil mutants have taken over Earth.

Shotgun, who had previously been held captive by a human military faction and forced to construct war machines, used their expertise in weapons engineering to develop a firearm which they kept secret from their oppressor. As the city and military base crumbled at the might of the mutants, Shotgun was eventually rescued by their partner, Kata. The pair fled to Ukraine, Kata's home, with the secret weapon carefully smuggled along with them.

When they arrived, they quickly joined a resistance group formed by a man called Viktor, who was an apparent survivor of the first wave of mutant attacks in Eastern Europe. When Shotgun and Kata presented the weapon, Viktor realized it may be the perfect device for stopping the mutants. Inspired by Viktor's words, Shotgun, weapon in hand, walked into the night.

Once day came, the others awoke to see Shotgun, atop the hill, covered in the blood of a thousand mutants. Shotgun bellowed,

"We have our weapon! We have the THUNDER GUN!"

The Thunder Corps. was born. 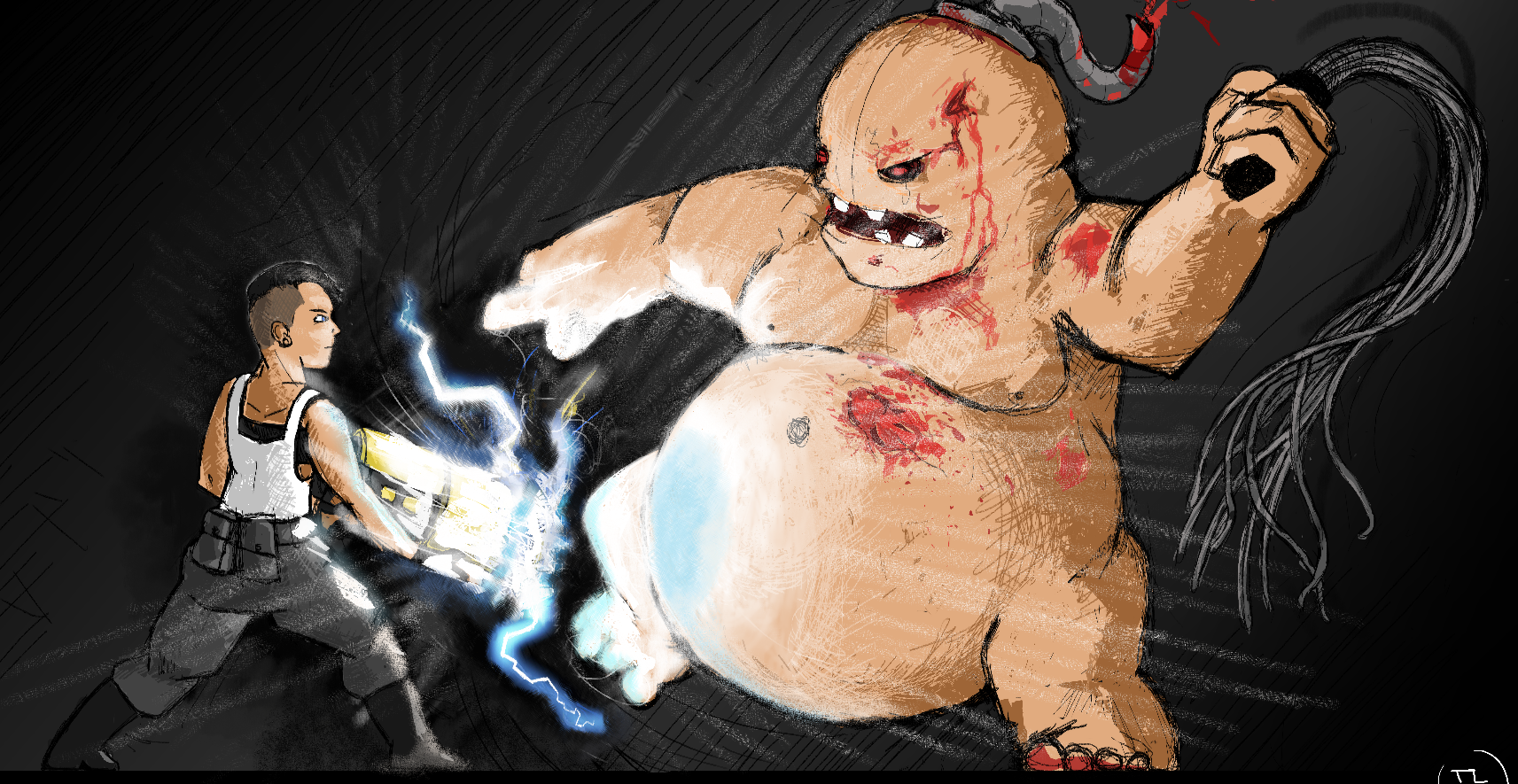 Promo Art featuring the character "Shotgun" fighting the infamous Fat Mutant Cat-o-Ninetails
(feel free to use this image! Be courteous and refer to them with they/them pronouns)

At its heart, Thunder Gun is a deep arcade game about survival and combos. Charging the Thunder Gun and firing will blast huge bolts of lightning to kill Drones and Mutants. When it rains, you'll be forced to pocket your thunder weapon and use a conventional sidearm until the storm subsides.

At first, you'll be struggling to survive a five-minute match. Quickly, however, you'll start learning the layout of the maps, finding the health packs and activating Tesla coils. You'll perfect Thunder Jumping, a maneuver that will let you fly the opposite direction you fire, much like a rocket jump. As you progress (even as you're learning), several new perks will become available, which can be used to give you an edge in the way you play. Some perks specialize in making your weapons more powerful, while others will change the rules, such as faster health pack respawns, shorter rainstorms, and even extra streak saves. Play enough and you'll even unlock characters to play as costumes to wear in game!

The challenge is never over; the more comfortable you become with Thunder Gun's systems, the more you are exposed the its hidden depth. High-level play revolves around maintaining your Hit Streak, which can be broken by missing shots or taking damage. You'll find yourself managing the amount of damage you take and health packs you pick up. You'll start taking bigger risks during rainstorms, using the increased multiplier given by your sidearm to your advantage. Deploying Tesla Coils will become a massive-scoring event. And if that isn't tough enough for you, you'll probably unlock the Thunder Medal, which will make the enemies spawn faster and lower your health when it's equipped. You may even be able to brag with an unbelievably high score.

It's been a really long haul! It took about a year of work to get Thunder Gun finished, and I feel like every single minute of turmoil has been worth it, and I hope it shows! If you are press or even just a big fan, you can get a hold of me at ted.lauterbach@gmail.com

Don't forget! The game comes out on September 3rd for PC/Mac! If you're already excited for the game, you should give it a vote on Greenlight!

Thunder Gun: Revenge of the Mutants